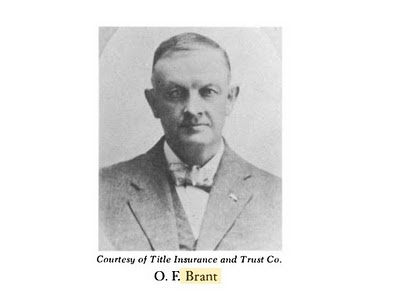 One of the fascinating stories in the Jue Joe saga is his friendship with Otto Brant. We have followed Jue Joe's story up to Los Angeles where he is employed as a house boy on a wheat ranch in Chatsworth in 1893. In that same year Otto Brant and his friend O.P. clark founded the Title Insurance and Trust Company in Los Angeles which is destined to become the largest Title insurance company in the United States. How does a poor Chinaman who is a houseboy on a wheat ranch , meet up with and become fast friends with a wealthy Title insurance president ? I do not have the answers , but I do have Otto Brant's life story which makes their association even more difficult to understand . Family oral history has Otto and Jue Joe becoming friends when they are both poor and both on the way to Los Angeles. If we follow Otto Brant's life story during the same years as Jue Joe this becomes very difficult to believe . There is ample documentation in real estate deeds and family oral history that Otto and Jue Joe were associates and friends but why or how that friendship developed is something I do not understand.

The following information is from a fascinating 1968 interview with Otto Brant's son , David, published in the California Historical Society Quarterly , Vol. 47, no 1, 2 and 3, 1968 .

Otto Freeman Brant was born in the same year as Jue Joe . They were exactly the same age . Otto was born in Hamilton Ohio on July 5th 1860. His father died when he was 14 . He had to go to work to support his mother and his mother's family. He started out as a boot maker , then became a railroad telegraph messenger. He worked his way up the ladder as a telegraph operator , and then station agent and then station manager and moved to Indiana. He married Susan E. Thomas in 1888 and left with his brother Byron Brant for California .
On the way to California Otto and Byron stopped in Midland Texas and got involved in building a big irrigation project. It did well and they sold it for $500,000 and made their way to Southern California . Otto's brother Byron became a big citrus grower in the Upland /Ontario area while Otto made his way into the Los Angeles area and began buying and selling real estate. He and his friend O. P. Clark initially struggled in the real estate business, but then a real estate boom in the area allowed them to make enough money to cash out and buy controlling interest in the Los Angeles Abstract Company . Otto had to mortgage his home to help with the purchase. Later they merged with the Abstract and Title Insurance Company of Los Angeles to form the Title Insurance and Trust Company on Dec 20 , 1893. This company was Southern California's oldest trust company and quickly became the largest title insurance company in the nation . Otto along with business associates and friends General Harrison Gray Otis , owner of the L A Times, General M. H Sherman ( for whom Sherman Oaks is named), Harry Chandler , editor and publisher of the LA Times , and Frank Pfafinger, Treasurer of the LA Times formed a business association which was called the Big Five.
The Big Five bought extensive land and owned land from Kings County to the Mexican Border . Their holdings included the Calfornia Mexico Land and Cattle Company , the Tejon Ranch , the Los Angeles Shipbuilding company ,as well as most of the San Fernando Valley, which they bought anticipating the arrival of water to the valley from the Owens Valley water project .
According to his son , Otto was a reserved man who would not let his company name anything after him , not even a street. He was according to his son a retiring kind of guy who was the power behind the throne of the Big Five.
The only mention of Otto or his family interacting with Chinese in David Brant's interview is an interesting comment from David. David studied foreign language while in college in Berkeley and one of the languages he studied was Chinese . He was surprised that it came so easy to him . He mentioned that to his mother who told him ;"Well you had a chinese man nurse you when you were a baby and he used to talk Chinese to you " .
Otto Brant died suddenly at age 62 of a heart attack in 1922. Apparently , Otto's car which was being driven by his chauffeur was hit by another car on the Ridge route and the man who originally admitted it was his fault ,probably realizing that Otto was a wealthy man, decided to sue Otto for damages in court , claiming that Otto's chauffeur was at fault . After testifying in court that the man was a "beautiful liar" , Otto apparently was so incensed and upset that he had a massive heart attack , fell over and died in the courtroom !
Posted by jjue at 8:26 AM