The Main Ranch House is Gone

Unfortunately, efforts to preserve the main ranch house on the Jue Joe Ranch property have been unsuccessful and the house was demolished recently. This completes the removal of all the historic structures on the ranch property. Our family is saddened by this news but are happy that the stories, memories, and pictures live on. 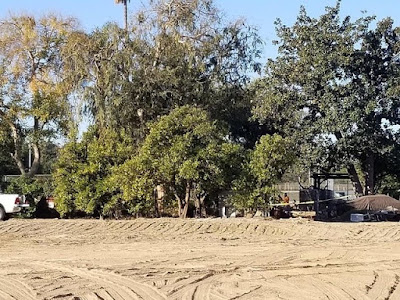 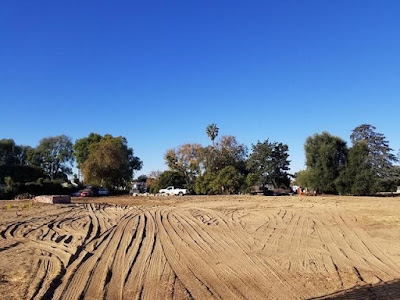 Auntie Soo Yin recently gave a wonderful talk on San Tong's Jue life story during the History of Jue Joe Ranch Series Part 3 at the Museum of the San Fernando Valley. San Tong was my grandfather . He was the son of Jue Joe and born in China , emigrated to America at the age of  13 with his mother and brother to join Jue Joe in  Los Angeles. He ran asparagus farming  and produce operations for Jue Joe and after Jue Joe passed away ran all farming operations for the Jue family and then moved to Mexico in the later part of his life  before returning to America to retire.

Here is her presentation.

Today  I was invited to give a talk on the friendship between Jue Joe and Otto Brant at the Museum of the San Fernando Valley.   For those unable to attend here is the you tube video of my talk.

One of the fascinating stories in the Jue Joe saga is his friendship with Otto Brant. How does a poor illiterate Chinese man who is a houseboy on a wheat ranch, meet up with and become fast friends with a wealthy Title insurance president? There is ample documentation in real estate deeds and family oral history that Otto and Jue Joe were associates and friends but why or how that friendship developed is something I did not understand. My talk concerns the research I have done and some of the answers about that very special and unusual friendship.
Posted by jjue at 2:33 PM No comments:

Recently, Franky Ortega,  a high school history teacher and local historian  has developed a series of Zoom  presentations on the Jue Joe Ranch for the Museum of the San Fernando Valley. As part of the first event on August 8th,  Franky asked Auntie Soo-Yin and I to talk. .

The first you tube video is a 20 minute presentation by me about personal reflections about the Jue Joe  Ranch.

The  second video  is 1 hour interview of Auntie Soo Yin by Franky .

The third  video will be a presentation by Franky Ortega of his videos and pictures of the demolition of the Jue Joe Ranch structures . This will be added to this post when available .

The  final  video is a 41 minute Question and answer session recorded from the live zoom meeting. For some reason this video starts in the middle of the Q and A , just rewind to the beginning to get the whole Q and A session. 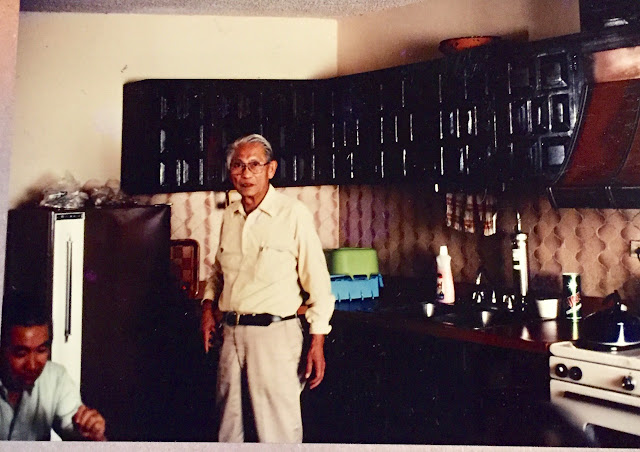 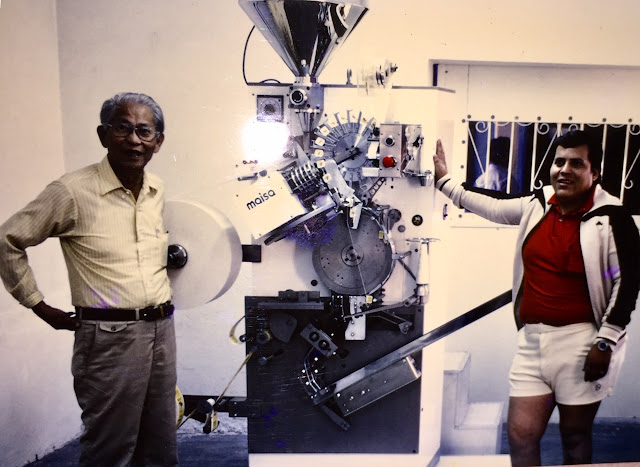 In 1947 or -48, when I was about two years old, we (my parents and I) were living in a small house on Vanowen Street, next to my dad's business (Albert's Mfg. & Supply, previously the Zoraster Hatchery. at 16115 Vanowen). The commercial hen cage systems my dad was making were selling well, and more little Zorasters were on the way. So dad bought a big lot around the corner on Woodley, and mom met with a local contractor. He (I don't remember his name) had just built your house. He had mom tour your then new house, which she did (she knew your family, probably from both Van Nuys and UCLA). Mom brought back ideas from your house, and the contractor drew up plans and a budget. Dad thought the plans were fine, but not the cost. So things got cut - specifically the fireplace. Which I remember mom complaining about. Since the family grew to four boys, all who went through a pyromaniac phase, it was probably a blessing. One of the photos shows one of you standing in front of house with everything covered with snow. We have a similiar picture, of me and my cousin, in our front yard. with everything covered in snow. It was during the winter of 1948-49, and I think it was the first time my dad had ever seen snow. Best of everything to you all, Dave Zoraster

editors note
ps Here is an earlier post from Dave with pictures.
Posted by jjue at 2:55 PM No comments:

It wasn't easy or trendy to take lots of photos back in those days on a working farm.  It would have been very sentimental if we could have captured more of life as it was then.  However,  I wanted to share this selection of photos further back in time and in particular, showing background landscape of what the land and structures looked like then.  So scan the photos for those details too.  Starting in chronological order that Diane sent the photos (it was easier for her to send them as she kindly put all my album photos into digital form to preserve them).

1.  Guy and I among asparagus ferns out in the field. 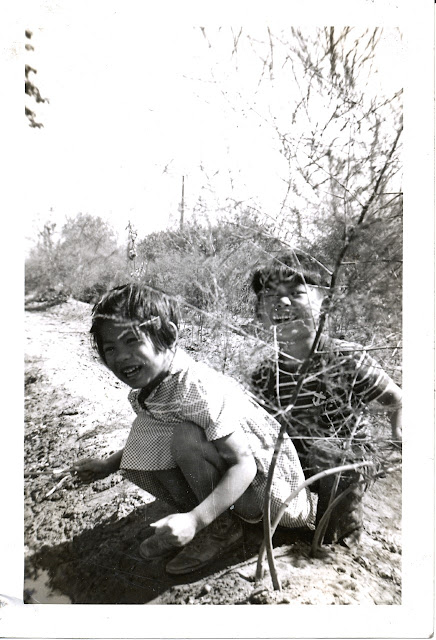 2  Guy and I at the side of the red barn 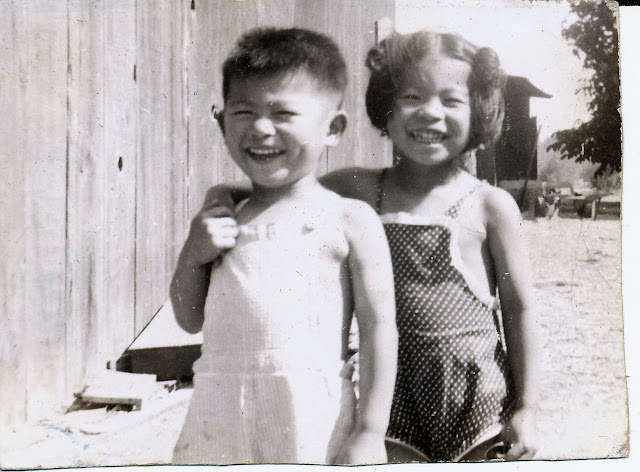 3.  Joan and her dog, with I and Pingy out in field nearer De Celis .  You see the back of area where Pa Pa and Ma Ma Kurihara lived.  They built a hot tub shed there too.  There used to be a pigeon coop at the back of that shed.  Then to the left would be the big chicken coop where we would daily collect eggs 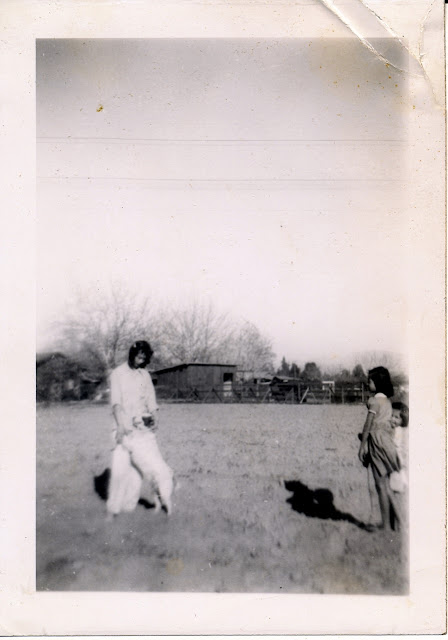 4.  I am holding the one bike that we all shared.  This photo was taken on the black asphalt area between the side door of main house (going into kitchen) and the pass thru driveway part of the packing house on the right.  To the left of pass through is the regular paved driveway heading onto dirt towards the gas pump.  Further to the left of the driveway under the tree is the notorious two field crate stacked up beehive where some young kid of one of the workers threw rocks at, creating a huge swarm of bees that were stinging horses, and people on farm.  We were all still living in the ivy covered old house (main house not built yet), I remembered Joan running into the house screaming because of bees in her hair and she dunked her hair into sink full of water!  It was quite awful and horrible.  No one could go outside for a long time.  That beehive stayed at that same location and we gave it great reverence, plus there was another big beehive at the Vanowen St. side of the ivy house where Jack grew gourds and there were rotating vegetable gardens there.  Bees were necessary for pollination and I got plenty of stings.

5..  Guy's horse, Senator.  He was old and had a sway back.  He's a gentle horse unlike Jack's strong-willed stallion.  Joan's horse ran away with me when I was atop her and she yelled, "Head towards the haystack.  She'll stop and eat."  I was saved. 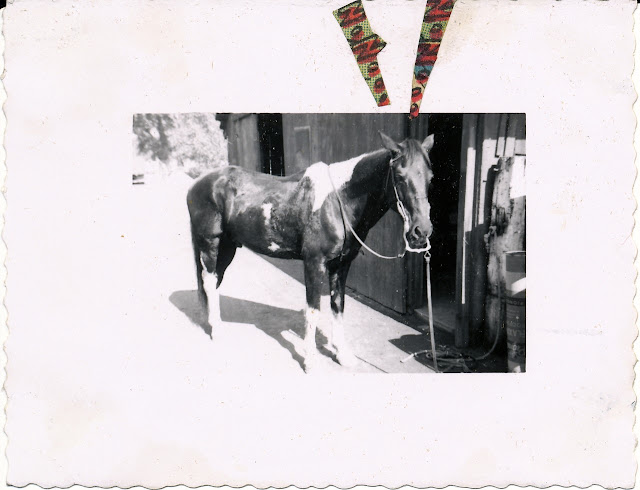 6.  My mother and the 4 of us in front of the goldfish pond on front lawn (which now is tennis court parking lot). 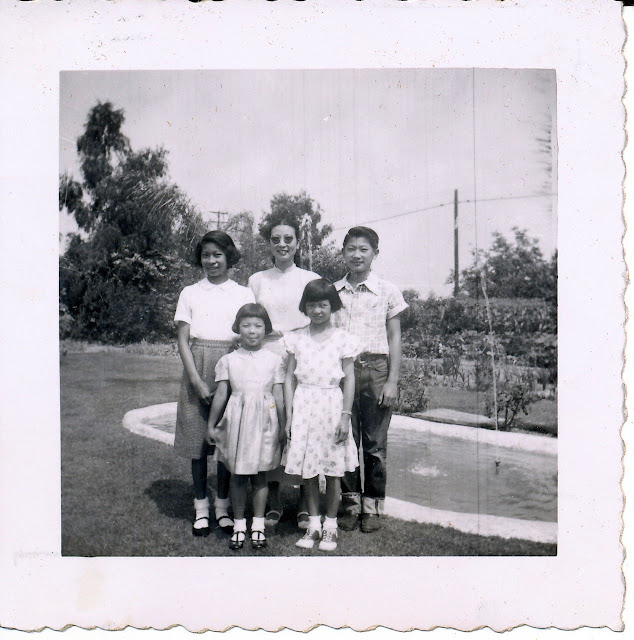 7. Guy and Soo-Yin in front of house.  Background was field then, but later was a corral 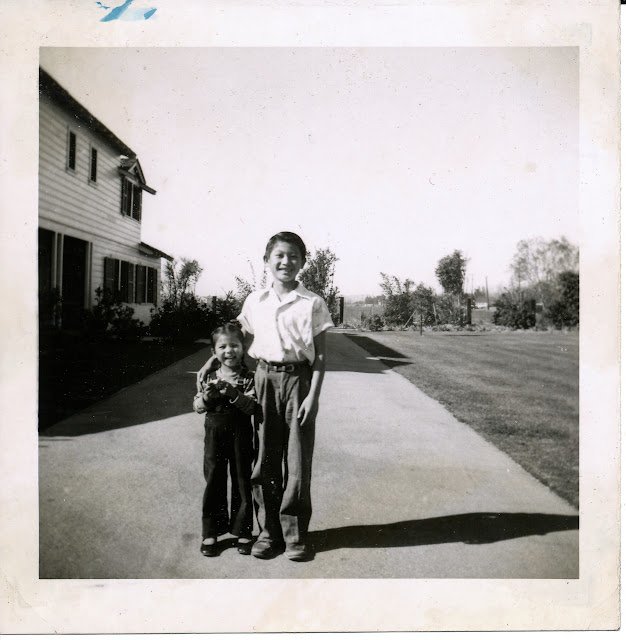 8. Bingo. Who can forget Bingo, the mascot of the Ranch? Very smart dog who guarded his territory and his family.  The one thing he hated the most....baths!  He also managed to chase away the feral cats and left us with litters of kittens every spring, which we parceled out among us.  Thus I became a life long lover of cats. 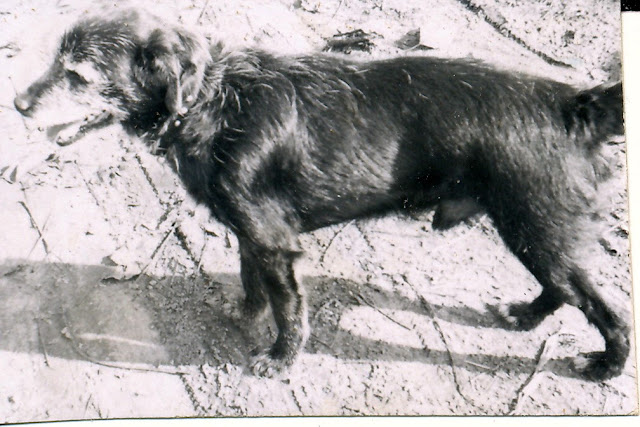 9.  Soo-Yin and Pingy on front lawn facing East.  Background is field, later corral, then morphed into tennis courts.   That shed you see in right background next to Vanowen St. is pump house with a round block of wood plugging a well.  When farm was active, a worker lived in there and used that block of wood as a table.  One year, a small plane crashed into a tree on side of Vanowen, right adjacent to the Pump House around 8:00 A.M.  Very loud noise so we all ran out to see and of course, that worker ran out too, not hurt but frightened. 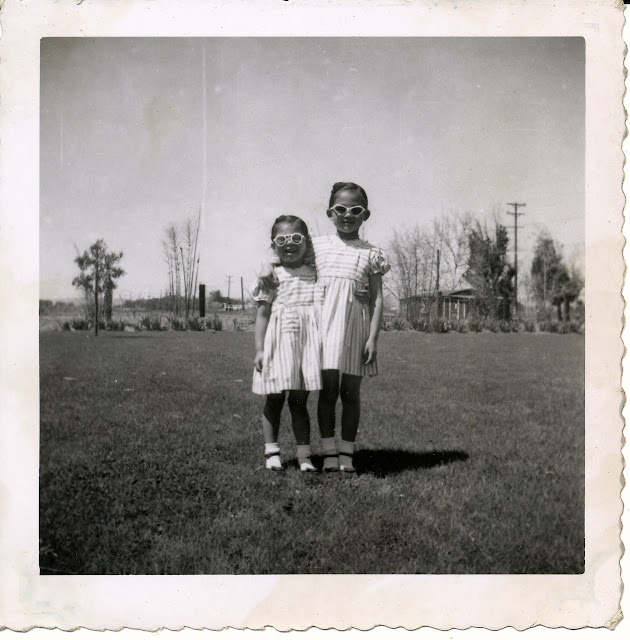 That's the stories connected to these pictures.  Hope they help round out your images of life when we grew up there.  Activities that I wish were photographed, but never were:  Jack milking the cow twice a day and my cat routinely going by to get squirted in face for lick of fresh milk.  Us using butter churn to make our own butter during WW2.  Having fun in the packing house after hours making roller coaster rides with field boxes sliding across the rollers from one end of packing house to the other.  Building forts and look out towers with bales of hay.  Guy and I running down the field to Victory to wave to the conductors as the train went by.  Selling fruits  from our trees in our kids' Stand on Vanowen and De Celis, putting the ripe fruits on top, greener ones on bottom.  Coyotes howling at night and sometimes roaming around coops, chicken creating ruckus.  All the animals that we've had on the farm:  Horses, cattle, chicken, duck, pheasant, pigeons, dogs, cats, goat, pigs, white mice, rabbits, guinea pigs, canary.  Ending with a tidbit.  When I was teaching first grade and students studying curr. of Cows/Milk, I asked my students if they've ever been to a farm.  They said, "Oh yes, we've been to the Pumpkin Patch!"
Love, Soo-Jan