John Steven McGroarty (1862-1944) was named poet laureate by the State of California legislature in 1933 , he was also a Los Angeles Times columnist . Here is a wonderful piece he wrote for the LA Times June 3, 1934 while prowling around the Los Angeles City Market at night . In this article he pays homage to my great grandfather , "Jue Joe-Asparagus King". It is a most fitting tribute to a great and humble self made man . 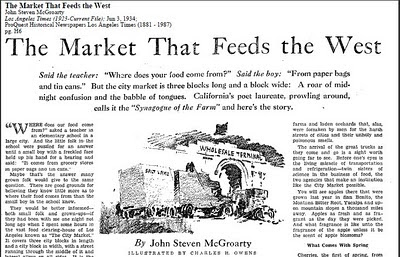 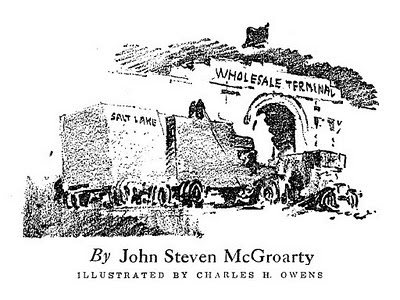 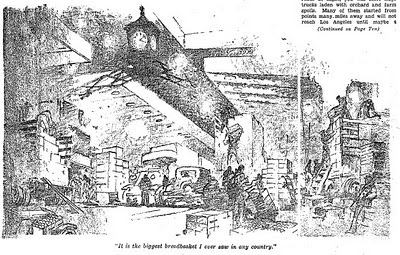 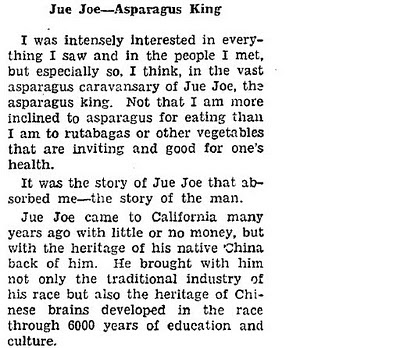 "It is the Synagougue of the farm, the orchard and the truck garden. " Synagogue" is a word taken from the Greek ,meaning " a bringing together." The Los Angeles City Market is just that-it brings together in one place the products of the soil, the harvests of the good earth...
The City Market is entirely a truck terminal . All its deliveries are made by trucks and not by rail .. The place at all times is as clean as the proverbial new pin. It is fragrant with delighting odors of fruits and edible spoils of the clean earth ... Trucks were pointed out to me that were bound for Utah , Idaho, Montana, Wyoming , El Paso , Phoenix, Reno and Las Vegas... It dawned upon me then that Los Angeles has come to be one of the greatest distribution centers of the world .

I was intensely interested in everything I saw and in the people I met , but especially so , I think , in the vast asparagus caravansary of Jue Joe, the asparagus king. Not that I am more inclined to asparagus for eating than I am to rutabagas or other vegetables that are inviting and good for one's health .

Jue Joe came to California many years ago with little or no money, but with the heritage of native China back of him. He brought with him not only the traditional industry of his race but also the heritage of Chinese brains developed in the race through 6000 years of education and culture.

Slowly but surely he established himself in the confidence of the community. He came to be trusted. His mere word was the same as another man's bond. He bought land on long time payments , meeting the conditions of the sale with religious punctuality. Again he bought more land, running true to Chinese form , and knowing that land-the good earth-is man's surest dependence.

Jue Joe surveyed the market possibilities for truck gardening and finally decided to specialize in asparagus. It was a decision that required not only foresight but courage and patience. Four years are required to bring an asparagus bed to production. Not every man is willing to wait so long for returns. Most people want quick action , quick returns for their labor. That's why so many workers attach themselves to weekly pay envelopes in factories and mines and counting houses.

Jue Joe was different . He could wait four years, and he did . Now he operates and owns 700 acres of producing asparagus which he disposes of at top prices not only in his own local market but broadcast through the country. He has sold asparagus as high as a dollar a pound. He is the only man in America who grows that vegetable every month in the year.

It was a long , hard struggle that this man went through, and now he is grown to be a little old .
Being a newspaperman has its advantages sometimes. My night in the great City Market was one of those times." 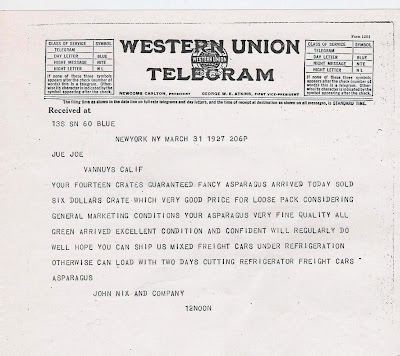 John Nix & Company: This Company was one of the largest wholesale distributors of produce on the East Coast. John Nix did business with Jue Joe Asparagus for more than thirty years.
Posted by jjue at 5:07 PM