This weekend my wife Liz and I went to St. Helena to celebrate our 22nd Wedding Anniversary. While there , I spent some time exploring Jue Joe's past in St. Helena . Documenting Jue Joe's St. Helena years is difficult because he was young and one of many Chinese laborers and there are few written documents and not much family oral history about those years. Those years are important , however, because they are Jue Joe's early years in America and his experiences at that time forged the man he was to become in later years .

Jue Joe arrived in San Francicso at the age of 18 in 1874 . He went to the Chinese Six companies in San Francisco for help and was sent to work in the vineyards in St. Helena, Napa Valley .
http://juejoeclan.blogspot.com/2010/06/finding-our-roots-beginning.html

In a 1906 immigration interview , he states that he applied for and received an Alien registration certificate in St . Helena in 1892 or 1893 where he was residing at the time . This certificate was required of all Chinese laborers in California . He tells the immigration official he was 38 years old at the time , but by our calculation he would have been 32 or 33 years old.
http://juejoeclan.blogspot.com/2010/06/jew-joe-immigration-question-and-answer.html

Here is an old building on main street in St. Helena that was built in 1892 . So Jue Joe would have seen this building , himself ! 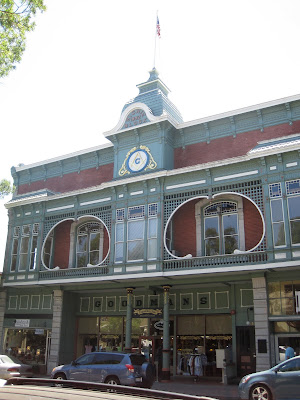 The Napa valley countryside is beautiful today and it was beautiful back in Jue Joe's time .
In the late 1800's there was wine boom going on in Napa Valley just like there is now . 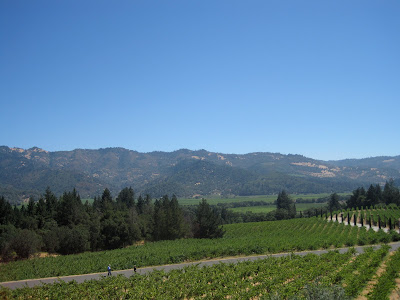 A visit to the local library and a bit of internet sleuthing was very fruitful in providing me with pictures and information about the Chinese in St.Helena during Jue Joe's time there . This information is priceless in giving us an idea of what life was like for Jue Joe while he lived and worked there.

Here is the caption on the picture below :
" The Chinese Exclusion Acts of the 1880's and 1890's marked the beginning of the end for so-called "coolie" labor in the vineyards. At one point , Cantonese workers accounted for 80 to 85 percent of field hands. Their places were taken by Americans and emigrant Italians before the nineteenth century's end. " 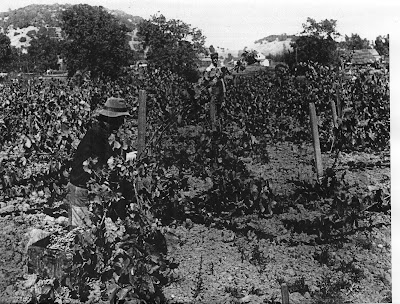 After harvesting the grapes , Chinese laborers were used to press grapes with their feet on top of giant wine barrels. Jue Joe was probably employed picking grapes and in the pressing process. 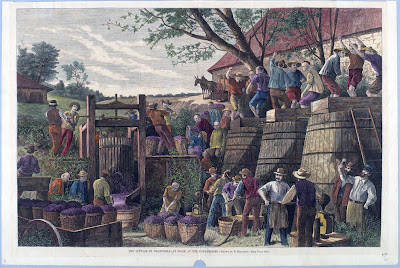 Click on the picture above of this engraving from the Harper's weekly for a larger and more detailed view and you will see that most of the winery workers are Chinese .
http://www.vinography.com/archives/2009/05/the_chinese_roots_of_californi.html


Other Chinese laborer's who had mining experience in building the Central Pacific railway over the Sierras were used to dig tunnels for wineries . This tunnel at the Beringer winery was built by Chinese laborers during Jue Joe's time . The end product were bottles of wine , which then as now were quite profitable for the Napa Valley wineries.. 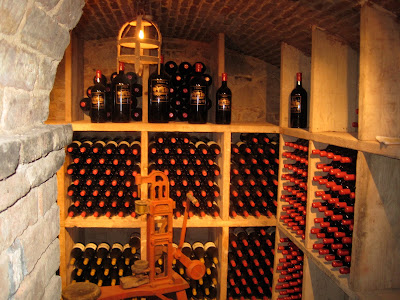 I found a wonderful book in the St.Helena library . It is called
Napa Valley Heyday by Richard Dillon. It’s a limited edition published by the Book Club of California. Your local library can probably get it for you.

Here are some quotes:

"Since Asiatics, by law were not allowed to own property but only to lease or rent it. John Gilliam became Chinatown's landlord-or slumloard. He had started out locally by supplying firewood to the railroad and cordwood for local consumption as fireplace fuel . He also sold redwood"grape sticks"(grapestakes) and by 1879 ran a manganese mine. In the late 1860's , Gilliam began to supply Asian newcomers with "temporary" housing : rude , hastily thrown -up shacks. By 1870, the dwellings had been joined by a China Store and a Cantonese restuarant.

Chinatown continued to grow , and by 1884 contained boarding houses, a hotel , more stores, the essential employment office or hiring hall , and even a " joss house" (temple) and cemetery. "


Here is a picture of St .Helena's Chinatown in Jue Joe's time courtesy of the Napa Historical Society. 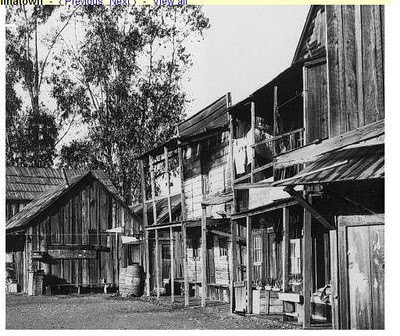 "Because the dead must be returned to their ancestral homeland , bodies were only temporarily interred . The bones were eventually dug up , cleaned , and shipped to home villages around Kwantung (Canton) and the Pearl River delta. Following Eastern tradition , graveyard plots were decorated not with flowers but with plates of roast pork and bowls of rice, repasts for the spirits of the departed. "

Here is a picture of a California Chinese graveyard( site unspecified ) circa Jue Joe's time in St. Helena 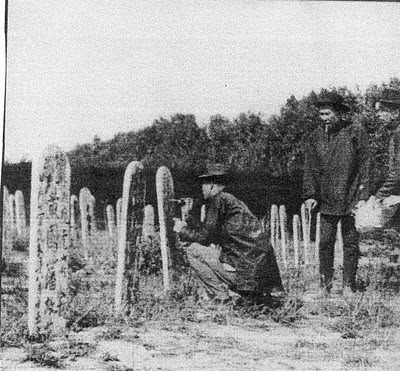 "During St. Helena Chinatown's heyday, most field hands lived in its ghetto and traveled by foot between ranches , farms, and vineyards starting at dawn and returning at sunset. Most Chinese laborers worked in fields, vineyards, hopyards, or mines. But some were household servants, cooks , laundrymen, storekeepers, and clerks. Still others dug the winery tunnels at Schramsberg and the Beringers' place , and laid rock walls to fence off agricultural fields and pastures "

In Jue Joe's time anti Chinese sentiment began rising in St. Helena as well as other California towns and in Washington a number of racist exclusionary laws were passsed.
In St Helena:
" boys chucked rocks at inoffensive 'Mongolians' downtown, while older youths shoved the hapless Chinese about. Some adults set their dogs on them . A local winery owner , Terrill Grigsby paid a price for his efficient Chinese laborers , whom he preferred to hire to prune his vines , pick his grapes, and cut his grain and hay. As anti-Chinese feeling spread in 1878 the barn at Grigsby's Occidental Winery and farm burned down . Grigsby found a note warning of future ' accidents' if he did not discharge his Chinese. Unwilling to be bullied by such cowards, Grigsby refused to do so , and sure enough , other mysterious fires followed, this time in his wheat fields.
An Anti -Chinese League in St Helena was founded in 1885 and in February of 1886 there was a protest march on Chinatown by the anti-coolie crowd. To its rather modest credit, the local newspaper the STAR never advocated violence or Vigilantism. 'We believe that Chinatown , that dark blot upon the fair name and reputation of our town, should be entirely wiped out . But not by unlawful means.' "

The demise of St.Helena's Chinatown was not, ultimately, the result of violence: "the federal exclusionary acts of 1882 and 1894 , which cut off all new immigration from China- just as the Valley's Asian population was aging , dying out , or moving on helped to hasten the end. Chinese were being replaced as the vineyard workers by white laborers, both ordinary Americans and immigrant Italians. Eventually , hostile sentiment faded away, especially as the Asian population dwindled. By the end of the nineteenth century , the Chinese disapora,-accelerated by not only the Chinese Exclusion Acts but also by fires (accidental, claimed the STAR) was drawing St Helena's minority to larger Chinatowns in San Francisco, Oakland, Sacramento and Stockton. The blaze of 1900 destroyed all that was left of St. Helena's chinatown and the very last residents moved away."

Long before then , Jue Joe himself left St. Helena and went south to work on the Southern Pacific and then to start potato and Asparagus farming in the San Fernando Valley .

I wanted to find the location of the old St . Helena Chinatown and talked to some local historians and ,after discovering where it used to be , Liz and I decided to have lunch there ! It is the picnic site of the roadside diner that was once called the Taylor Refresher just south of town . Now it is called Gott's roadside diner . While it still serves the usual hamburgers, fries and shakes , it also sells trendy roadside gourmet food like the raw AHI poke fish tacos, I sampled. Very good ! Sitting here , it was fun imagining the hustle and bustle of St. Helena's old Chinatown and my greatgrandfather Jue Joe , walking about in this very spot ! 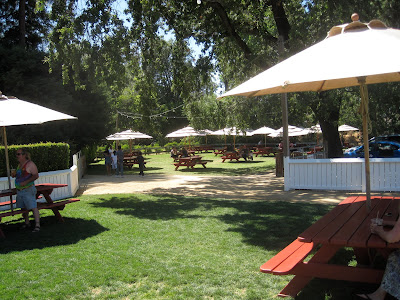 ps. edited 8/21/2010
Further research into Jue Joe's history leads me to believe that he left St. Helena to work on the Southern Pacific railroad around 1886 . I believe that his immigration interview was inaccurate and that his first certificate of identity was obtained in St. Helena around 1882 or 1883 after the passage of the Exclusion act and was a certificate of identity without a picture. He later obtained a second certificate of identity in Los Angeles in 1893 with a picture after the passage of the Geary Act mandating certificate of identities with pictures. Events in St . Helena also support my theory that Jue Joe would have left around 1886. In 1885 an Anti-Chinese League was formed in St. Helena with the focus of agitation against Chinese being employed as vineyard laborers. In February of 1886 there was a protest march on Chinatown by the anti -coolie crowd , assembled at City Hall by the signal of whistles and bells. The Chinese had been forewarned and had deserted Chinatown and all the buildings were shuttered tight.
Anti Chinese agitators demanded that all of Chinatown be condemned by the Board of Health as a public nuisance. Gilliam , the slumlord owner of the Chinatown property , penned a long letter to the St . Helena Star after the protest march indicating that he was willing to ask his Asian renters to leave, if someone would buy the "improvements", the shacks, on his land from him. I think that 1886 was a very good year for Jue Joe to leave St . Helena and seek work elsewhere . In that year the Southern Pacific Railroad was actively hiring Chinese crews for construction of the Coastal route of the railroad with hiring being done by labor bosses in Oakland and it would have made great sense for Jue Joe to make his way to Oakland post haste.

edited 6/15/2011 Turns out that the location of St. Helena's Chinatown was actually a bit south of the site of Gott's diner . More information about St. Helena's Chinese history is found here .